Indulging myself in my recent sushi obsession for the umpteenth time, I did something I can only imagine is offensive or at the very least mocked by the Japanese: I ordered extra wasabi. In case you haven’t noticed by now, spicy food and me? We’re married. So you can imagine my delight when the “extra” wasabi I ordered was a laughably large amount. I loaded up each piece of my ever-exotic salmon-avoacado roll with too much wasabi and still I had so much left over. Then, as I eyed two lonely potatoes in my kitchen, I remembered I had once enjoyed wasabi mashed potatoes at a restaurant, and thus this recipe was born:

Cut potatoes in half and boil them for 20 minutes. 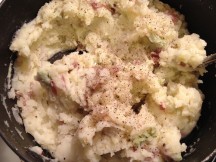 You can use whatever kind of potatoes you like, I had both red and yellow here so I made a mixture. I cut them in half, boiled them in salty water for 20 minutes (until fork tender), then mashed-eems up with about 1 tbs of butter, 1/2 cup of half and half, 2 tsp of wasabi, and salt and pepper. I’m told the leftovers make delicious potato pancakes — stay tuned for that. 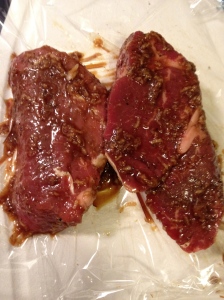 Marinade the steak in garlic, ginger and soy sauce. 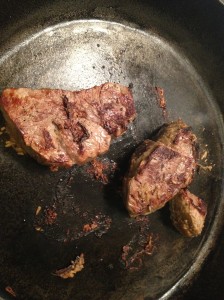 Crank that heat up and onto a DRY pan for 2-3 minutes per side.

For the marinade, I grated the ginger and garlic into a bowl with some soy sauce. I salt and peppered the steaks and then let them sit at room temp in the marinade for 30 minutes. While that was sitting, I got the potatoes together and I didn’t throw the steaks on until the potatoes were already finished boiling. Once the pan is hot, and I mean really quite hot, drop the steaks down onto a dry pan to ensure proper browning. I did two minutes per side and they came out medium rare (although a bit on the rare side), so if you’re more of a medium, do three minutes.

Sauté asparagus in butter for 5 minutes. 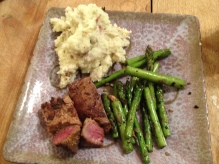 All for less than $5 per serving! POP POP

I recommend letting the steaks rest a few minutes before you cut them. This is the perfect amount of time to lower the heat on that pan, throw on a little butter and quickly sauté up some asparagus to complete this steak and potato dish with a little asian flair. Who has two thumbs and really dug this meal? This guy: