I was feeling rather bored with all the typical dinner choices this week. Everything seemed meh until my man suggested something he loves that I’ve never really given a chance: gnocchi. I consented, albeit rather hesitantly.

Then, as we were walking through the super-est of the markets in our neighborhood, we happened up some ground lamb. YES! Something new. I was elated. 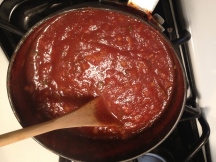 I made the tomato sauce with garlic, onions, basil, oregano, cumin, salt and pepper

I cooked the lamb with garlic and onions. Drain the fat before adding it to the sauce

Never having cooked lamb before, I wasn’t exactly sure how to do it. But it looked like beef so I just did it like beef and guess what? It worked. I kept it a little pink in the pan because I knew it would cook more in the sauce.

Let the sauce and the meat simmer together for 20-30 minutes.

I added the gnocchi just at the very end and then a little romano cheese on top.

This being my first time really eating gnocchi, I didn’t think it best to try my hand at making it, so we bought a package and dropped it in some salty boiling water until it floated to the top, which I’m told indicates it’s finished. It was tasty and potatoey– a very decadent dish.

Served with salad and a nice Chianti... yes I considered fava beans... no my man did not get the joke... did you?

This salad was actually rather intense, it had your basic lettuce, tomato, carrot, onion, cucumber, but I also had some left over avocado, asparagus and feta in the fridge. WINNING.

One response to “Gnocchi with Lamb Bolognese”