The 4th of July Means Burgers and Beer

Falling on a Wednesday, this 4th of July seemed to catch everyone a bit off guard. Do we celebrate the week before? The week after? The whole week? What’s the American thing to do? Duh… Work.  So since everyone in my home had to work on the 3rd and the 5th, we decided to stay close to home this year, but that didn’t stop us from celebrating the day the American way: with lots of food!

We began by indulging ourselves in our absolute, hands-down, bar-none favorite lunchtime meal: fruit and cheese. Now it may not seem American, but when I put it to you like this: 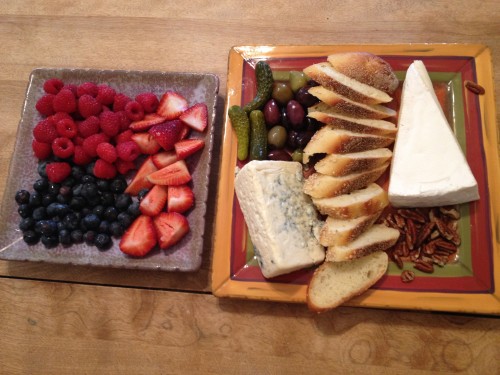 I think you’ll be forced to agree. The colors are even overwhelmingly red, white and blue. The brie, the bleu, the berries, the pickles… so many flavors to wash down with an ice cold American brew. Snobbishly unwilling to drink any form of mass-produced light lager, we went with two ales from the Captain Lawrence Brewing Company, based right here in Queens. I enjoyed a pale ale, as per my modus operandi, while my mate enjoyed a belgium-style brew as per his. Yes, it’s a little douchy. Yes, we’ve embraced it. Yes, it complimented the cheese and fruit perfectly. And we knew it would pair well with the little challenge we’d arranged for ourselves at dinnertime: Re-create the Ring of Fire Burger at Queens Comfort, with this we decided to make buttermilk battered baked onion rings (try saying that 3 times fast). 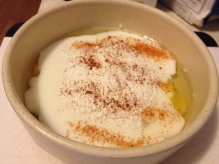 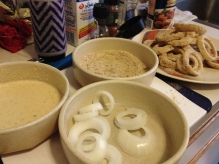 Dip in the batter, dredge in the breadcrumbs, then onto a plate.

Baking the onion rings rather than frying them had very little to do with calories, as should be made obvious by the fact that they are battered in buttermilk (Thank you, Martha Stewart). It was mainly because we don’t possess a deep fryer and we have only one skillet suitable for pan frying many things as once. So I battered and dredged the vidalia onion rings and put them on an oiled cooking sheet before popping them into a 450 degree oven for 15 minutes (flipping them halfway through). 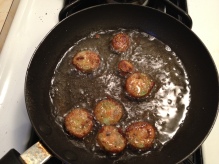 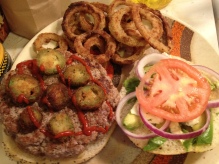 Our take on the Ring of Fire burger.

If you’ll remember, the Ring of Fire Burger at Queens Comfort has fried jalapeños and sriracha and was incredibly well-recieved by my person. It was his idea to recreate the burger, adding avocado obviously (since it would appear we don’t really know how to eat meals that don’t include this fruit). I added bleu cheese to mine for funsies and it was ta-styyy. A bit wider and flatter than the one at Queens Comfort, but all-in-all, I’d say we made our forefathers proud. Happy Birthday, America!