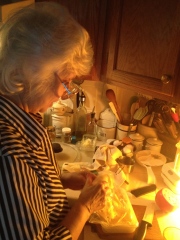 This is Mary, Queen of Blue Eye.

I had the good fortune of spending last weekend with my family just outside Blue Eye, Missouri. I had heard my father gush for months over my Aunt Mary’s cooking, so you can imagine my delight not only to be able to eat her food, but to be able to record it. She was kind enough to let me invade her kitchen with my camera to capture a few gems for this blog. Today I’ll be sharing a brunch recipe I’m calling Frittata a la Mary. Her spin on this egg-based dish includes a bottom layer of shredded potatoes. 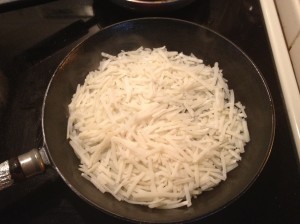 She began by browning some shredded potatoes.

After she browned the potatoes, Mary mixed 6 eggs with 1 cup of half & half and 2 tablespoons of butter and added that to the pan right on top of the potatoes. Then she added about 4 ounces of cheese, which needs to be gruyere or some kind of good melting cheese. She then added a special seasoning we call “the essence.”

She added the eggs, tomatoes and cheese.

After laying the tomatoes across, she added a little more essence and into the oven! Adding some final flourishes, this is what was served: