Anyway, first he sautés the kale with garlic and sometimes red wine. He then adds red peppies, jalapeños and chicken into the pan. Once it’s all melded together, he tops it off with olives (and in our pre-Whole30 days, hummus).

It’s tangy, crunchy, tasty and healthy so it made for a perfect quick dinner earlier this week. The next night I made a disaster of a spaghetti squash dish that I won’t even go into because it was such a travesty. It does serve as an adequate segue into dinner last night, which involved the other half of the spaghetti squash.

This variety of squash is one I discovered only recently while residing in Nashville. I have a particularly fond memory of being unable to cut my very first spaghetti squash in half. I was on the verge of panic when my slight but powerful roommate Sam came valiantly to my rescue. “Let me try,” she says as she proceeded to beast one of our knives through it’s thick skin like it wasn’t shit as she casually mused, “I’d cook it cut side down,” she says, “that way it steams itself.” And she dropped the fucking mic.

She would have been ashamed of the monstrosity I created out of the first of the spaghetti squash (and rightfully so) but she would have applauded our commitment to not wasting food when Jared created this: 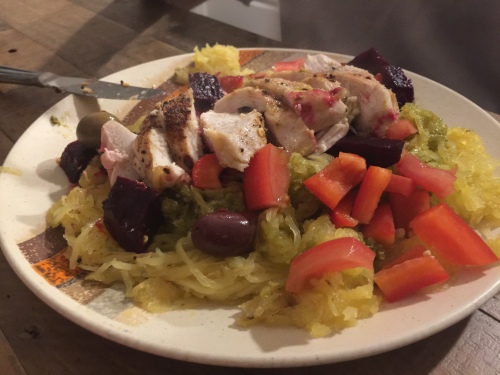 After yoga last night we were debating whether to eat out or eat in and ultimately reached the conclusion that, with a fridge full of food, there was only one objectively right thing to do. Said Jared, “Who do we think we are? Our fridge is full of fresh food.” Said me, “Yeah, we’re not babies, we can eat what we have.” To that end, I had snacks on snacks in this order:

Because I’M NOT A BABY. I’m a big girl who really wants pizza and beer tonight. 🙋🏽🍕🍺