Once upon a time, during a stroll in the East Village, we happened upon a lovely little pub advertising $3 draft beers. I happen to be a big fan of $3 draft beers, so we decided to sit for a spell. The locally brewed ale was refreshing, but I had the pangs of hunger sneaking up on me. To my delight, I saw the menu boasted mac and cheese, then to my absolute enchantment, I saw the menu offered something else: chili mac and cheese. Something I’ve never had before, I enjoyed this dish so much that I had to attempt my own version.

I started by making the chili, then while it was simmering, I began with the mac and cheese.

<– Here is everything I used to make the cheese sauce.

I did not make the pasta from scratch (maybe some day soon) I used big shells from a box.

First I put the pasta into a pot of salty boiling water (this recipe calls for a 1/2 pound). The shells take 14 minutes, so that gave me plenty of time to make the sauce. First I mixed 3 tablespoons of butter with 3 tablespoons of flour. I whisked this all together, stirring constantly for about 5 minutes. Then I added half a onion, chopped, 2 cloves of garlic, chopped, 3 cups of milk, a dash of paprika and cayenne and salt and pepper. Then I let this simmer for about 10 minutes. Don’t forget the pasta!

After ten minutes, I added in 8 ounces of shredded cheddar cheese. It melts fast and then in with the pasta! Once the pasta is all cheesy, pour it into the casserole dish (ours is foil cause we’re classy) and put 4 more ounces of cheese on top (just get a 12 ounce bag and do 2/3 and 1/3). I added a little spicy monterey jack too, but that’s up to you. 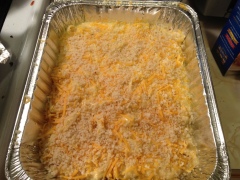