Last week, a discussion was had in my home regarding the lack of vegetarian dinners had by us. I suggested we do a mushroom-based dish, which is a big concession for me because I don’t particularly care for mushrooms, but I thought it might be a nice change. Somehow, after vast discussion, we decided on mushroom-stuffed chicken. Yes, I realize that’s not vegetarian. No, I’m not sorry. Why? Because it was delicious. And it was insanely cheap. We bought one portabella mushroom ($1), a small hunk of feta ($1), thinly sliced chicken cutlets ($3), one potato ($.50). We already had the olives and the asparagus.

First, I sautéed the mushrooms with garlic, ginger and olive oil. Then after brushing the chicken with the olives and throwing a hunk of feta down, I scooped in as much of the garlic-ginger-mushroom mixture as I could. 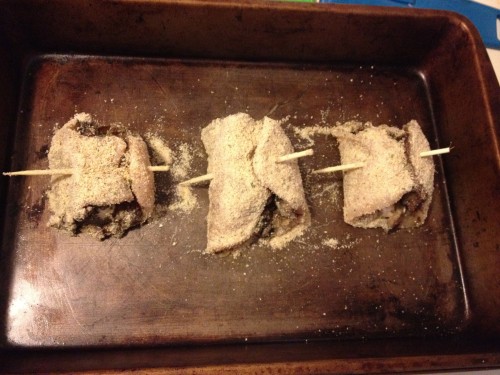 Wrap them up carefully, pin with toothpick, roll in breadcrumbs and douse with butter!

I’m sure this would taste fine non-breadcrumbed and buttered, but I’ll never know for sure cause it’s too delicious like this 🙂

It goes into a 350 degree oven for 30 minutes, giving me just enough time to get the side dish together!

We were originally going to have just grilled asparagus, but having once enjoyed a potato and asparagus hash at a restaurant, I thought, “I bet I can do that! It’s just cutting up everything into small pieces.” And I was right. I threw in the potatoes first, let them brown, then threw the garlic in, let it crisp a little, then only did the asparagus for the last five minutes so it stayed nice and crunchy.

I put food on top of other food because it makes me feel fancy.

This was a very pretty dinner we had that was packed, and I mean PACKED, with flavor. It was crispy and gooey and crunchy and yummy. AND it cost less than $3 per serving. I dare say… POP POP.

Fancy Food on the Cheap

For dinner last night, I continued with the Mediterranean theme for the sake of both my tastebuds and my pocketbook. Our market has chicken breasts two to a package and I used one for the skewers on Sunday so that left me with a second one, which I cut in half long-wise to make two portions, which I then stuffed with spinach and feta cheese. Serving this with the leftover chopped salad, also from Sunday, I’d say it’s one of the least expensive dinners I’ve made (and one of the fanciest)!

This entire process took less than an hour (including cooking time) and it’s a lovely and frugal way to serve yourself or guests! 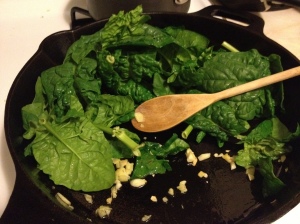 I started by sautéing the spinach in olive oil, garlic and ginger until its wilted.

Then, after cutting the chicken and spreading a bit of olive paste on it, I mixed the spinach with the feta cheese and loaded up the breasts.

Then I wrapped-eems up and pinned them with a toothpick, rolled them in breadcrumbs and poured over 1/2 cup of butter. Then into the oven at 350 for 30 minutes!

Once it's brown and crispy (and the juices run clear!) just add some salad and enjoy!

Stuffing chicken is something I thought was super hard and is, in fact, super easy. What’s more is you can stuff chicken with anything! You want spicy? Stuff with beans and jalapeños. You want fresh? Stuff with veggies and some citrus. Such a versatile recipe, make your own version and let me know what you come up with!